Daniel Craig will star in a production of “Macbeth” on Broadway this spring.

The James Bond star will play opposite Ruth Negga, lead of the film “Loving,” who will be making her Broadway debut. Sam Gold, who directed “King Lear” and “Fun Home,” will helm the production. 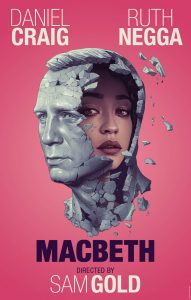 “Macbeth” will play the Lyceum Theatre starting March 29, 2022. Opening night is scheduled for April 28 and the production will play a strictly limited 15-week engagement.

The play is produced on Broadway by Barbara Broccoli, producer of the James Bond films, The Shubert Organization, Michael G. Wilson and Frederick Zollo. “Sing Street,” produced by Broccoli was scheduled to play the Lyceum Theatre before the theatrical shutdown, but later announced it would return to Broadway at some point between winter 2021 and 2022.

“Daniel is not only a great film actor but a magnificent theatre actor as well. I am thrilled that he will be supporting the return of Broadway playing this iconic role with the exquisitely talented Ruth Negga making her Broadway debut and under the expert direction of Sam Gold,” Broccoli said in the release.

Craig has previously appeared on Broadway in a 2013 production of “Betrayal” and “A Steady Rain” in 2009. Additional casting for “Macbeth” will be announced at a later date.

‘Merrily We Roll Along’ will open on Broadway in 2023

‘Into the Woods’ will tour U.S.

Pulitzer Prize-winning ‘Fat Ham’ to open on Broadway in 2023